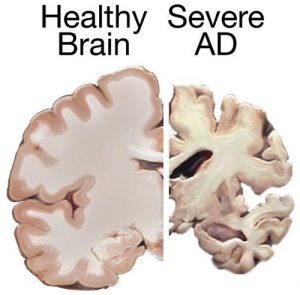 Researchers have increasingly noted that poor oral health appears to be a risk factor for Alzheimer’s and other forms of dementia (not to mention other chronic inflammatory conditions).

What is unclear is whether gum disease is actually the cause. New research in Science Advances suggests the answer may be yes.

confirmed earlier reports that P. gingivalis [the main bacteria involved in gum disease] can be found in the brains of deceased people with Alzheimer’s, and they detected the microbe’s DNA in living patients’ spinal fluid. In more than 90% of the more than 50 Alzheimer’s brain samples, they also spotted toxic enzymes produced by the bacteria called gingipains. Brains with more gingipains had higher quantities of the Alzheimer’s-linked proteins tau and ubiquitin. Even the brains of roughly 50 deceased, apparently dementia-free elderly people selected as controls often had lower levels of both gingipains and the proteins indicating Alzheimer’s pathology.

But were bacteria causing the disease? To find out, the team infected the gums of healthy lab mice with P. gingivalis – bacteria which they later found in the animals’ brains. They also observed dying neurons and higher levels of beta-amyloid proteins. Those peptides are the main component in the plaques found in the brains of Alzheimer’s patients.

It would be a complete fantasy to say that now we’ve solved Alzheimer’s based on this…. People need to know that this was a small study…. It’s way too early to say that this result is valid. We need to see many more samples. We need much more replication.

Still, a recent review of the literature similarly suggests that P. gingivalis may play a causative role in Alzheimer’s. Infections in various mouse models, its authors note, have “demonstrated the development of key…lesions defining” the disease – plaques, blood-brain barrier defects, neurofibrillary tangles, and more.

While the authors of the first study mentioned found that treatment with a small-molecule inhibitor targeting gingipains in the bacteria could block its neurotoxic effects – the study was done by a biotech company, after all – the simple act of maintaining a healthy balance of microbes in the mouth may also be protective, as the authors of the review note.

Maintaining an oral microbiome symbiosis and preventing periodontal disease with regular surveillance and good oral hygiene throughout life is likely to reduce the incidence of unwanted suffering from AD.

Add other components of healthy, holistic living to that – a nutritious diet, regular physical activity, quality sleep, and so on – and the benefits can be even greater for mouth and body alike.